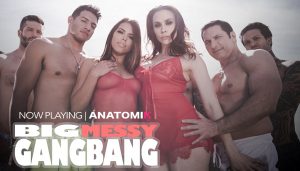 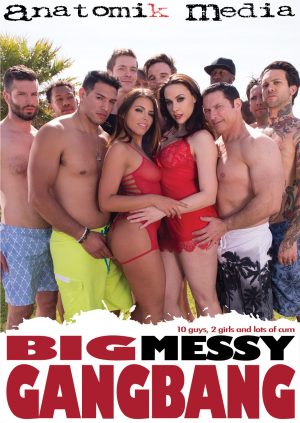 When Adriana arrives, the men stay hidden in the house as Chanel and Adriana try to change John's mind. They are out by the pool with John and start getting kinky with each other in an attempt to turn John on. They kiss and fondle each other in hopes of a reaction.

Instead, he goes into the house and comes back with a cooler and a watermelon (I guess the 9 guys were really well hidden). In the cooler are a lot of ice cubes and popsicles. He tells them of his fantasy.

He wants them to put the ice cubes in their holes and lick whatever comes out. After that they should do the same with the popsicles. Just by talking about this, John starts getting hard. He crushes the watermelon with a steel mallet and crumbles the melon over the heads of the two girls. This is driving the girls wild and they suggest that they take the party inside.

When the guys show up, they come out cocked and loaded. Their huge cocks are out and Chanel and Adriana are full of enthusiasm. They immediately get to blowing and fucking the cocks. They suck and suck the cocks so far in their throats and spit all over the place.

The girls are completely doused with the sparkling wine.