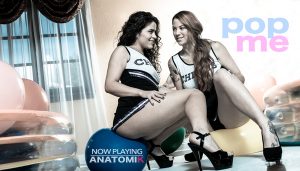 Aubrey has just arrived in town for a cheerleading meet and shows up at Victoria’s to catch up on old times. Victoria is reluctant to let her in because of what she’s set up in her house. A full on balloon extravaganza. Victoria finally relents, the two discuss their love of balloons, and sexy times ensue.
64 min

Victoria puts the finishing touches on her solo, balloon popping extravaganza and Audrey shows up to surprise Victoria. She’s a long time cheerleader friend that moved away and is in town for a cheerleading competition that Victoria is also competing in? They were on the same squad for several years.

Even though Victoria is thrilled to see her, she’s hesitant about inviting her in and exposing her fetish. Though she can’t avoid it. She invites Audrey in and we see everything all set up. Audrey is surprised but you can tell she thinks it’s cool and looks so fun! Victoria is so glad she doesn’t question her about it at all.

Victoria mentions that she was about to start playing a comedic sit-pop game to record and put on her YouTube channel for her follower’s entertainment. Audrey asks if she can join in on the fun and Victoria says yes. 🙂 Victoria tells her the plan and decides to also tell her about her fetish. Perhaps Audrey chuckles and hesitantly tells her that she also has a balloon fetish. They both look at one another with excitement and get to popping!

As they get more and more into the games they start getting turned out, sharing sexy glances throughout. Once the games are finished, they eye the 24” balloon left over and Audrey or Victoria shares their idea for game 3, so they can indulge their desires together.